I couldn’t let the draft go by without checking for quotes and I wasn’t let down. Not a bit. These guys really need to think before they speak. Ha! But it’s a boon for me and my readers. But before I forget, John Ross for the Bengals.  I’m for the pick. Yes. Who Dey!!!

Now, about those quotes…

Hee hee. Hopefully he doesn’t make a mess, too.

Because anything less is uncivilized.

“Finds the hole and fills it.”

Probably what he’s supposed to do. It’s appreciated.

“He can’t carry a major load.”

Better than slow and lazy.

“He’s got the arm; he’s got the athletic ability…but can he be competitive in the pocket?”

That’s up to him. If he can use what he’s got, then he’s fine. If not, then they’ve got issues. 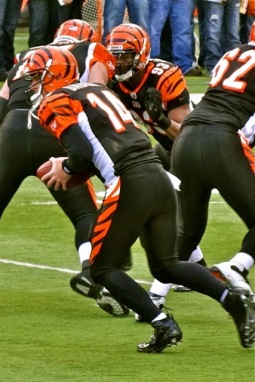 Well, we’re not playing, so I can at least enjoy the game. Would’ve been better with the Bengals playing, but it happens. I wish the Giants would’ve done better, as well as the Raiders and the Dolphins, but it happens. I’ve gotten used to resigning myself this season. Hopefully 2017 will be better.

“the protection up front is working.”

Always good to have working protection.

Better than going to one side or the other.

“You have to get deeper than that.”

At least make them feel it.

“Found a hole and stuffed it.”

What else are you supposed to do with that hole?

Because they like to be sandwiched by the smaller ones.

“looking for a spark.”

Better to have one than not. Makes the whole situation more pleasurable.

Meaning he can last for that long. 14 turns. Nice.

So… the game versus the Eagles was better than I’d expected. We actually looked like a team and not just a mishmash of bodies on the field. It’s a real big deal. Go Bengals!

“Can get it into really tight windows.”

Is that what we’re calling breaking in the newbs these days?

“Such a match-up when you can spread that defense that much.”

He knows his stuff and how to use it.

Sounds the way it is. He loves his pounding.

It wasn’t called free and easy night for nothing.

Well, he’s the pound king. He’s not made for everyone.

They don’t call him the king for nothing.

“Makes him finish in his face.”

Oh… gracious. It’s not been a fun few weeks for the Bengals. They’ve played hard, but it isn’t showing up as wins. Boo. Keep the faith, right? Sigh.

Better than a rim job…unless that’s what was wanted.

And he knows how to use them.

“wants to feel the leather.”

“Cuts the ball in the wind.”

Better than the cheese.

“He got so much penetration…wow.”

We’re part of Monday Night Football. I’m hoping we go against type and pull this one out. Honestly, they don’t do well in prime time. That doesn’t mean I don’t have faith. I do.

“a good little stunt inside.”

When you’re not big, it can happen.

Well, maybe he was good to begin with and lost it. You don’t know.

It’s all part of the experience.

That’s what happens when you play. You can get burned.

“too much time in the hole.”

As long as you’ve got enough lube, there’s no such thing as too much time in the hole.

“Four tight ends in a row.”

For better selection, of course.

“One of the better stiff arms you’ll ever see.”

He said no. Deal with it.

“Spread ’em out in that formation and you saw what happened.”

He gets his pick and it makes him happy. Everyone wins.

Well, we stink. No, I take that back. It’s not been the easiest season for the Bengals this year. Oh well. We’ll get there. To cheer me up, let’s get to the funnies.

Waiting to be filled.

“They’ve got the deepest penetration.”

Then send them to the gaping holes.

He’s a player and he’s going to do so.

On the guy making plays and penetrating?

Out from under the puppy pile would be a good thing.

Um… sure? Not sure what this has to do with football.

“After the initial release to get back on top.”

He wriggled out from the pile and hopped back on. He wasn’t done.

“Waits for his tight end to open up.”

Gotta love a man with patience. He’s a caring soul.

Well… the Cowboys gave it to the Bengals good. Sadly. Sigh.

To cheer me up, let’s get to the funnies.

Or there could be trouble.

“Put the meat out front.”

So we can see what we’re buying.

“All of the penetrating.”

If he’s got the meat, the let him have at it.

“So much penetrating in the back.”

‘Cause there’s a party in the front .

“Then you expose yourself on the back end.”

If that’s what you want, then go for it.

“He gets a lot of touches.”

He’s the man. He should. Everyone wants to touch him to prove he’s real.

He gets around and for good reason. He’s a cutie.

Which is a whole lot better than vertical.

“Exciting awareness by the big man inside.”

I’d sure hope he knows what he’s doing. Geez. 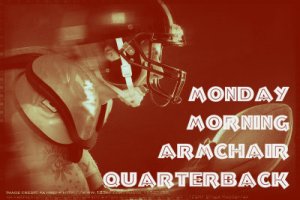 The big game came and went. Some thought it was great. Others not so much. I’m not sure which version of the Panthers showed up, at least for the offense. They stunk. And award-winning Cam was a sham. Then again, Peyton, the play maker was not. The defense for both teams were the real stars.

But since I can’t wax poetic about the defense, let’s hit last week’s funnies.

Here are the Honorable Mentions. I love them.

That’s even on his business card.

“Pushing through that little tiny opening.”

But that’s what they love about him. He knows how to work a hole.

See? Now he’s got it sorted out. It was tiny and now…Woo hoo!

Now onto those Quotes of the Week. This is the final one until preseason next fall. Preseason cannot get here fast enough!

“Putting him on tight ends.”

Because he likes those tight ends! It’s his fetish.

“Can he handle the size, the speed, the strength…?”

Who knows, but we’re all ready to watch so we can see what he can do.

“In the slot on the left side.”

Because he’s already tunneled the one on the right!

“Able to prevent the big tight end from getting the first.”

Because he’s already taken care of the right side. He can focus on getting that other tight end.

Now for the Doozy of the Week. Woooweee….

Because everyone likes a little double penetration.

Thanks for reading and checking out my thoughts on the games. I love posting these and watching my favorite sport. Stay tuned for a few racing quotes of the week. You never know when those will show up! 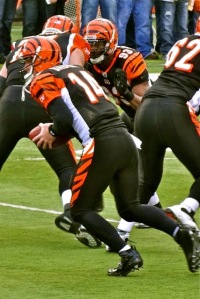