By Jean-Christophe Destailleur (Own work) [CC-BY-SA-3.0 (http://creativecommons.org/licenses/by-sa/3.0)%5D, via Wikimedia Commons

I saw this picture and it reminded me of Caught Me, one of my Challenges stories. She’s in the throes of happiness, probably really turned on and on display. That’s a lot of what Maura gets to experience in Caught Me. She gets to be on display and to play with her husband and a friend. How cool? Want to know more? Then read on!

Caught Me (Challenges 7) by Megan Slayer 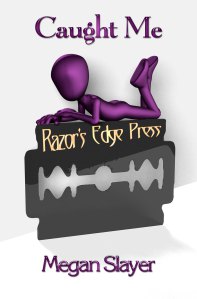 Finding time to spend with the one he loves is difficult — until Trick sends up a challenge.

By Jean-Christophe Destailleur (Own work) [CC-BY-SA-3.0 (http://creativecommons.org/licenses/by-sa/3.0)%5D, via Wikimedia Commons

I saw this picture and it reminded me of Caught Me, one of my Challenges stories. She’s in the throes of happiness, probably really turned on and on display. That’s a lot of what Maura gets to experience in Caught Me. She gets to be on display and to play with her husband and a friend. How cool? Want to know more? Then read on!

Caught Me (Challenges 7) by Megan Slayer

Finding time to spend with the one he loves is difficult — until Trick sends up a challenge.

Trick’s tired of not seeing his girl and he’s going to do something about it. He’s offered her a challenge. Meet him at the club. Simple, easy and sure to be decadent. He’s going to make her wildest dreams come true.

And now an excerpt:

I’d issued a challenge. I couldn’t wait any longer. I needed to see her. We’d been apart a long time and I was tired of keeping my distance. Time to get my girl.

Actors are strange creatures. We’re focused and talented, but we’re also busy. I should know. In the last year, I’d starred in two productions and co-starred in another that was sure to get me plenty of attention come awards season. But that was me.

Right now I’d like to tell you about Maura. My Maura.

She’s an actress. A damn good one. She’s dangerously intelligent, funny, and sexy as hell. When she walks into a room, every head turns. Men want to be with her and women want to be her. She works hard at her craft to be the best actress she can be.

I didn’t get to see her very often. Her social calendar was full of galas, award shows, productions and television work. The gossip rags couldn’t decide if she was fucking her leading man or leaving her husband… or both. When you’re a beautiful person in the center of Hollywood and all over the tabloids, people speculate about what you’re doing and who you’re doing it with.

Speaking of doing it, you’d think our paths would cross. We’re both in the same business. We should have been seeing each other all over the place. You’d be wrong. In the last year, I’d spent the total of a whole week with Maura. In Hollywood terms, that was a long time. In the real world — well, we’d never make it. The time apart had definitely taken a toll on our marriage. Why wouldn’t it? But we’re not a normal couple. Nope. The distance between us actually brought us closer together. We’re stronger.

But missing someone wasn’t the same as holding her in my arms. I was aching for her. I was done not being with her. I was going to catch her so we could play our games. I was ready for the hunt. 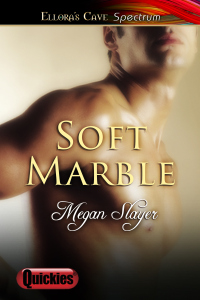 One touch from his lover and this marble will come to life.

Kratos, God of power and strength, has been imprisoned in pure white marble for more than two centuries. His lover can break the spell—if only his lover would find him.

Andy Green knows his ancient artifacts. He spends his days restoring works of art. When the sculpture of Kratos enters his studio, he can’t hide his attraction. Will he be able to free the god or will forces beyond his control destroy everything he’s earned?

Andy strolled down the hallway to the restoration room with his bag slung over his shoulder. He still couldn’t wrap his mind around what had happened. One minute he was…

Adam Pallas knows what he wants out of life—to teach history, to be happy and to have a hot woman by his side. He’s got one out of the three. He should be happy, but he’s not. There’s one woman who grabs his attention every time. The catch? She’s very much out of his league. Can being himself actually snag the woman of his dreams?

Melissa Murphy isn’t looking for love, but every time she sees Adam her plans go sideways. The English teacher knows there’s a confident, hot man hiding behind the slightly nerdy history buff façade. But her past and the things she wants between the sheets tend to scare men off. She believes the odds may be stacked against them. But it turns out that their lives might just be perfectly written… 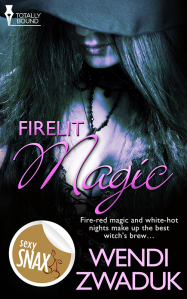 Cian’s coming into her own with her magic. She’s happy rescuing the black cats society doesn’t want, but she’s lonely. A sexy man to warm her nights would be perfect. Too bad the man in question isn’t interested–or is he?

Officer Tommy Barnes noticed Cian and her red hair the first time he stepped into her store, but a witch and a cop should mix–should they? And what’s with her interest in black cats? His investigative sense has him stopping back at the store over and over. He can’t deny his attraction to her. His sixth sense says she’s harmless, but a little investigative work between the sheets never hurt.

Can Tommy withstand the red-hot fire or will this witch get the best of him?

This book follows secondary characters from Candlelit Magic. This book also contains scenes of magic and… 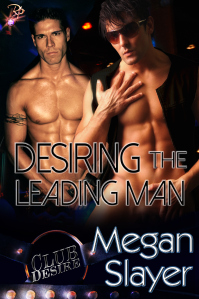 Get your rocks off however you want at Club Desire. We’re not easy and we’re not free, but we are discreet. Find your fantasy in the Club.

An actor with a mega-sized ego? Check. The role of a lifetime playing a submissive in a major motion picture? Check. A Dom with unlimited patience? There could be a problem with explosive results.

Dylan Tyler isn’t used to being told no. He’s the hottest actor in Hollywood with a long list of films to his credit. His specialty includes taking risks for his roles and immersing himself in the characters. He’s about to portray a submissive for his latest flick—except he knows nothing about the lifestyle. He’s at Club Desire to learn, but the line between performance art and life… 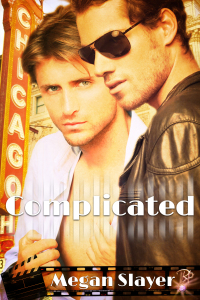 Finding the love of your life is hard, especially when you’re young and in the movies.

Jonathan Reynolds came to Cleveland, Ohio to break into the movies. He might not have the most orthodox methods, but he’s got the drive. He wants to be a star and shed his small town image. He’s no kid, although at twenty-one, he’s not very experienced. He’s happy with only having a few lines during a crowd scene—until he meets Sean Banks. Maybe it’s time for this virgin to come of age.

Sean Banks has been there, done that—on everything. The former child star grew up in the glare of the spotlight and beat his addiction to drugs and alcohol. But at twenty-four, he’s considered all washed up. He knows the role in this high budget action picture will…