Supernatural Branch of Law Enforcement empath Ella Walsh sucks memories from people’s heads. The job fills her mind with others’ nightmares and leaves her with little time for love, but if she doesn’t pair off with a mate of the government’s choosing soon, the psychic blowback will destroy her powers and her sanity.

The last time shapeshifting SBLE superstar Vadim Morosov worked with an empath, he got her killed and himself assigned to a desk. He worries about taking on another partner, but helping Ella track down an empath killer might be his only chance to save his career.

Naturally, the government decides to throw them together.

They resist at first, but they can’t deny the simmering heat between them. As the killer’s strikes grow closer to home, their bond gets tighter. And when the murderer finally traps Ella, her developing link with Vadim might be the only thing that can save her.

And now for an excerpt:

Speaking of misbehaving… Ella’s gaze came to rest on the broad shoulders of an unknown black-haired man who was studying the vending machines with deep suspicion. He wore a nice dark suit, white shirt and tie, which meant he was either a regular government employee, or some religious groupie that had inadvertently slipped through security.

Male was probably a more appropriate word than man, because Ella could already tell there was something not quite human about him. As she approached, he turned more fully toward her, and she got her first good look at him. She sighed. He was way out of her league. With his pretty face, height and distinctive cheekbones he could have graced the cover on any magazine. Her appreciative gaze dropped to his broad chest—imagining him, preferably without his shirt on. She’d just bet he worked out.

“What’s up?” she asked as he continued to study her.

He looked even more confused. “I beg your pardon?”

His Russian accent was as divine as his cheekbones, and she actually wanted to squeal a little. She gestured at the five-dollar bill in his hand and spoke very slowly.

“Are you having trouble with the vending machine? Don’t they have those in your country?”

His sapphire-blue eyes narrowed. “Yes, they do, and you don’t need to worry about whether I can under- stand you. I spent four years at Harvard, so I speak American.”

“You do?” She flashed him her best smile. “Then I’ll leave you to it.”

Award winning author, Kate Pearce was born into a large family of girls in England, and spent much of her childhood living very happily in a dream world. Despite being told that she really needed to ‘get with the program’, she graduated from the University College of Wales with an honors degree in history.

A move to the USA finally allowed her to fulfill her dreams and sit down and write her first romance novel. Kate is published by Signet Eclipse, Kensington Aphrodisia, Ellora’s Cave, Carina Press,Cleis Press and Virgin Black Lace/Cheek.

you can find her at:

“Want to Get Away?” Just Got a Sexy Makeover!

Find your wildest fantasies at the Q…

Hanging out with Sara Jay!

I am doubly excited to have Megan Slayer here today because not only am I a big fan; I now have a book in the same series as hers! This week she’s going to tell us about her Soul Debt book Paid in Full, which is now available from Changeling Press.

Tell us a little about your latest release.

Soul Debt: Paid in Full is my latest release. It’s part of the fantastic Flash Fiction line, Soul Debt. I had
to write it because the characters wouldn’t let me alone. I’m glad I did. Nicky needed redemption and Antonio… he’s based on a friend who just begged for a story! I’m glad I made his day.

What’s it about? Nicky makes a sexual pact with the Devil. Yep, THE Devil. He gets a boyfriend who loves him in return for sexual payment. There are a few snags and it’s up…

I know it’s St. Patrick’s day, but I thought I’d share a little bit from my story that takes place during another holiday, Valentine’s day.

Here’s a little bit about it: 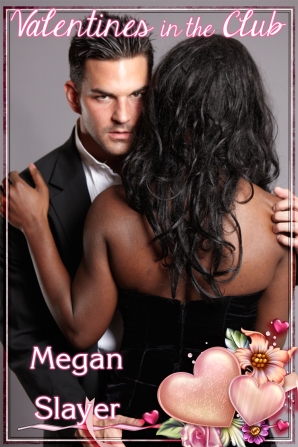 Being single on the dreaded day of love sucks. Ask Morgan. Three years in a row of sucky dates have made her gunshy. But a night of clubbing and a chance meeting with the man who features in her naughty fantasies just might turn this girl’s thoughts around. Maybe.

The moment he laid eyes on Morgan, Trip knew she was the woman for him. And what better day to make his move than Valentine’s Day? He’s about to find out how hard he’ll have to work to get what he wants—her.

Shara Azod LLC,    All Romance Ebooks,   Amazon
Here’s an excerpt for you:

“You’ll do anything to push people away, won’t you?” Trip rose to his full height, then grabbed her hand. “Come on.”

“Where the hell do you think we’re going?” Morgan braced her feet. “I am not going anywhere with you.”

“You’re pissed and hurting.” His blue eyes blazed, and his warm breath feathered on her cheeks. She noticed the freckles sprinkled on his nose. Since when had he sprouted freckles? And why was she looking?

“Lacey said you were upset, but I never expected you to be this upset.” Trip wrapped an arm around her. He tugged her across the room, through the throng of sweaty bodies to his office. What did he want? To stretch her across his desk for a quickie? Hot sex against the wall while the dancers partied, oblivious, on the other side? Her pussy quivered, and she pressed her knees together.

Trip McDivott served as the principal player in all her naughty fantasies. Now he wanted her alone in his office. If she wasn’t mistaken, she could’ve sworn she heard Lacey giggle over the thundering dance music. The cooler air of his office slapped her back to reality. This was her boss. She shouldn’t imagine him wanting her for anything other than as an employee.

“Trip, let go of me. I’m here for fun, not so we can have a staff meeting.” She nudged him away from her, only to have him hold her tighter. “Trip, don’t make me bust your balls.”

He shut the door with one hand, then turned on her. “We need to talk.”

Wendi Zwaduk – Romance to Make Your Heart Race
“The depth of the characters and their love was beautifully told by Ms. Zwaduk…a deeply emotional story.” BlackRaven’s Reviews
Also writing as Megan Slayer – Sometimes It’s Fun to Squirm
“Ms. Slayer has penned a fast-paced, action packed story with engaging characters and uninhibited passion.” BlackRaven’s Reviews
http://www.wendizwaduk.com/
http://wendizwaduk.blogspot.com/
https://wendizwaduk.wordpress.com/
http://wendizwaduk.com/indexMegan.htm
http://theauthormeganslayer.blogspot.com/
Friend us both on FaceBook and Follow us on Twitter!
Newsletter sign up:  http://ymlp.com/xgjmjumygmgj
Its always better on dirt!

Check out what Megan Slayer has to say!

I want to welcome Megan Slayer to Muse Wednesday.  Megan has taken a slightly different approach to Muse Wednesday today, and shows how her Muse led her in a direction she normally wouldn’t take.  The result is her m/m story, Believe.

Believe in the Muse

Thanks to Moni for having me here today. I got to stop by a few weeks ago as my alter ego, Wendi Zwaduk. I write as Megan Slayer, too. Yes, I have to be different.  I thought I’d talk about my short story, Believe.

I love stories that have a second chance element to them. There’s nothing more exciting to me than seeing two people who have had issues find a way to work things out. Believe is one of those stories. The two main characters have a strong relationship, but even the strong ones have moments of crisis. It’s how they deal…

Its time for a BOOK BLAST!! Welcome Cristelle Comby and her book, Russian Dolls.

Cristelle will be awarding an autographed print copy of Russian Dolls to a randomly drawn commenter during the tour.

Read on for more about the book!

Alexandra Neve is a student at University College London whose world suddenly falls apart. When her best friend jumps from the university’s rooftop, she can’t stop herself from asking, ‘Why?’ The police rule her friend’s death a suicide and for them the case is closed — so whom can she turn to for help?

Sometimes the person you need the most is the one you least expect to find, and in this case it’s none other than Ashford Egan, a blind middle-aged history professor, who’s more willing than most to listen to what she has to say.

Neve and Egan are as different as they come. She’s restless, careless at times, and fearless when the need arises, while he’s almost the complete opposite: a deep thinker with an analytical mind, a highly rational and collected individual.

As they enter the violent world of the Russian mafia, they must overcome their differences and learn to work together. It’s their only chance if they want to survive.

You don’t think about them unless you’re forced to. You take the first for granted and try to forget the second.

You get on with your life, worry about meaningless things and you simply stop thinking about death, even though you see it every day on the telly, in the papers you read.

So long as it’s happening to others, you continue to go on with this comforting lie that says it’s never going to happen to you. The Reaper won’t come anywhere near you — until the day he does.

It could be a car crash, it could be a stroke. Or it could be your best friend jumping from the rooftop of the university you both attend. And suddenly you remember that death is very real and there’s no way of knowing who is going to be called next. You’re forced to face the frailty of life and accept your own mortality.

My best friend recently passed away and I almost died twice myself in the past couple of weeks. My name is Alexandra Neve. I’m a student who used to live in a reassuring bubble. It burst, and now I finally see the world for what it truly is.

Cristelle Comby was born and raised in the French-speaking area of Switzerland, somewhere between Geneva and Lausanne, where she still resides.

Thanks to her insatiable thirst for American and British action films and television dramas, her English is fluent.

She attributes to her origins her ever-peaceful nature and her undying love for chocolate. She has a passion for art, which also includes an interest in drawing and acting.

Russian Dolls is her first new-adult novel, and she’s hard at work on the next titles in the series.

Find out more at www.cristelle-comby.com