This last couple weeks haven’t been my favorites. I had a couple of setbacks and found out my grandfather isn’t doing well. It’s been tough on me. But I’ve had bright spots. I’m back to walking 2.5+ miles every day and while I’m not writing as much as I’d like, the laptop is working. I can write. I’m writing a little and making some progress.

But the bright spot has been my pup. I know she’s older and she’s slowing down. She snores louder than she used to and can’t see where she’s going. She tends to pass gas right next to me and isn’t perfect, but who is?

What she is, is loyal. She knows when I’m down and when I need a hug. She knows when I want company. She’s been there for me this last couple weeks when I needed her. I’m glad. Without her, I’d be in a world of hurt. She’s my dog. She hangs out with me while I binge watch shows and write.

She’s not perfect, like I said. She’s a champion gas passer. But she’s the best. I’m glad I’ve got her.

I realize this isn’t the longest post and it’s probably a little boring or over the top. Oh well. I needed to get this out. I needed to talk a little about what’s been going on and how I’m dealing. Thanks for reading.

But she’s got this reverse sneeze gagging thing she does that’s…well…gross.

What do I mean? It sounds like she’s about the throw up, but she doesn’t. Just sort of gags and makes gross sounds. Oh and if I’m lucky, she toots, too. Yeah. It’s great. Stinky and noisy at the same time.

So here I am, trying to write a love scene and what’s she doing? You guessed it.

Excuse me while I get the gas mask… 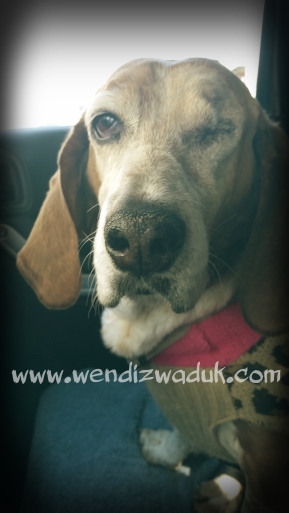 As I sit here, I’m trying to work on one of my romances. I’ve come to the part where the characters will give into their physical desires and well, you know…inserting tab A into slot A. It’s hot and exciting.

But it’s also not going the way I want. Why? The dog is next to me making her gagging sound – lends to romance so well, right? Licking, snorting and just being a dog. RIGHT NEXT TO ME. It’s distracting.

I can’t write sex when the dog is making strange noises next to me. They’re all normal dog noises. She’s fine. She had her most recent check-up yesterday. There’s a chance the glaucoma that was in her left eye could migrate over to her only remaining eye. It’s good the glaucoma hasn’t migrated, but bad that it could. I’m hopeful for now. She makes a gaggy noise that’s a reverse sneeze and it’s been more frequent of late. You guessed it…she’s been making that noise while I’m trying to write. The reverse sneeze isn’t anything that will hurt her. Sounds horrible. But when she was under anesthesia, the trach tube messed with her trachea. The flap that modulates between the opening to her lungs and her tummy was what got messed up. It takes time to go back to normal after a surgery and that’s what’s causing the gaggy noise.

So she’s fine, but noisy. She wanders a lot, too. I think it’s still her trying to get her bearings now that she’s only got one eye, but when she’s left alone, she sometimes puddles on the floor. She’s 13, so it happens. I try not to leave her alone unsupervised, but it’s hard when the story is working and I really want to be writing.

Don’t take this as me disliking my dog. I love her dearly. She’s my dog. My girl. Don’t take this as complaining, either. It’s not. I know she’s slowing down and getting older. That’s how life works. Nothing lasts forever.

This is my life as a writer with a dog. It’s not glamorous or thrilling all the time. It’s fun, dirty, messy, turbulent, but also fantastic.

I love my dogs. I do. They’re loyal, friendly, sweet…and full of baloney. Not real baloney. But they live to be themselves. Once I think I have them sorted out, they do something I hadn’t expected.

My dog, for example. She’s only got one eye. She lost the other to glaucoma that got out of control. I guess it’s part of her breed. I still think that’s funny because she’s part basset and part beagle. Which part is her breed? Which part is the one to decide what she’ll genetically get?

But she’s only got one eye now. I have to be careful which side of her I stand on and I made sure to touch her back if I’m behind her so she knows I’m there. I still play games with her to make her hunt for me so her hunting skills – which she only uses to hunt me – are still sharp.

This post, though, is how she still amazes me. She’s 13 and down an eye, so that’s pretty amazing, but that’s not what I mean.

I woke up this morning to scratching and grunting. Both dogs are fixed so I knew it wasn’t that. What the heck was she doing? She’s got a dog bed and it’s pretty plush. It’s at the foot of my bed, so I know she has to be in the room. So I continue to hear the scratching, so I get up. I round the bed and there she is…half under the bed and stuck. She’d somehow wedged herself under the bed and was scratching to get out. How’d she get there? I’m not sure, but I’m guessing the big dog mushed the bed down just enough that she probably rolled while she slept. She’s a sound sleeper. She probably woke up thinking, gee, this is tight. I should get out of there. Then started scratching.

Needless to say, I got up earlier than I wanted, but I helped her get unstuck, so it was worth it.

And yes, that’s my pup in the picture this week. 🙂 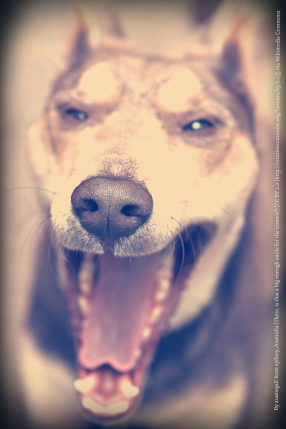 Note, that’s not my dog. I didn’t have a photo of her handy to post. I will next time. Plus, this photo was just too cute not to share.

I’d planned on writing blog posts for both days this weekend. Planned on getting a lot done. Yeah, I said planned. My dog had other ideas.

I love my dog. She’s my dog. People like to tell me she’s just a dog, but she’s not. She’s mine. She adopted me. For whatever reason, she’s decided I belong to her. Works for me.

Most of the time I don’t mind her shenanigans. I mean, she’s a dog. She can’t always control herself. I know that. But this weekend, she was a real pill.

It started out with a pair of matching socks. No, the more I think about it, the whole thing started Sunday morning at three a.m. I don’t sleep well. One noise and I’m wide awake. I hear the dog making noises and wake up to find she’d barfed. I clean it up, get her settled and go back to bed. She graces me with the same thing at five-thirty, but this time I got her outside before I had to clean anything up.

Then after I was up for the morning,  I found a puddle on the floor. Seems when I’d decided to wash the grays out of hair the night before, she had to go out, but couldn’t, so she left me a present. Needless to say, I found the puddle in those matching socks.

I get teased by DH. If I’m wearing matching socks, it won’t be a good day. If they don’t match, then it’ll be okay. Turns out, he was right yesterday.  After the multiple messes, my pup decided it would be great to wander the house. This isn’t bad, just…I have to watch her. Last month she had to have one of her eyes removed due to glaucoma that was uncontrollable. Not good. But she’s bounced back wonderfully. Really. For being 13 and down an eye, she’s a champ. She’s still got the spunk in her step and can’t wait to go for car rides. It’s just that sometimes she strolls the house for what seems like forever and occasionally if she doesn’t think anyone’s around, she’ll leak.

She didn’t intend to make a mess and I can’t blame her for having an upset tummy. It happens to the best of us. I honestly can’t blame her for the puddle, either. I should’ve been watching her. She’s old and leaks. If I’d have been keeping an eye on her, she might not have done it. Like I said, she has to be watched.

But I bring this up because I was told the other day that authors have brilliantly wonderful lives that are full of glamour and fun. I can’t say I don’t love my life. I have good dogs, good cats (well as good as cats can be), a great family and I get to do what I love by writing. But it’s not all rainbows and skittles. Not by a long shot. I ended up going through three pairs of socks yesterday. Got mud on my jeans when I watered the plants because I went to check one of them and transferred the dirt from my hand to my pants. See? Not thrilling stuff.

And yet, I managed. I’m still here. I’m breathing. I will get some writing done later. It’s a good day. Even with the puddles and mishaps, it’s good.