What is something you wish you’d known when you first started writing, is an interesting question. It can pertain to my craft or career.

I’d like to hit a point or two on both. There a lot of things I wish I knew when I started in this crazy business. Some things seem rather simple and like everyone should know. The thing is, not everyone knows those simple things.

One craft thing I wish I knew when I started writing was finding a beta reader. This probably seems simple. Duh, have someone else read it before you send it. But I didn’t know that. I *assumed* authors wrote something, sent it to an editor and poof! They were published. Yes, I knew the editors did work on the MS, don’t get me wrong. But I had no idea there should be beta readers in the mix. I also didn’t know you have to be SUPER touchy about who beta reads for you. I don’t mean finding someone who will tell you the story is great. That won’t help you at all. I mean, finding someone you can trust. See, that trust thing, another thing I didn’t know right off, is something you need. If you can’t be sure that person won’t be truthful and not steal your work, then you probably shouldn’t be working with them.

On the career front… I have a couple thoughts here. One is never ever engage, especially to the negative, with reviewers. Now, I’ll admit, I do engage with some reviewers. Why? I’ve met them in person or they’re fun people. That’s no biggie. I don’t expect reviews from them, and if I get them, fine. What I’m talking about is the negative stuff. There will always be people who don’t like your work. You can write the greatest novel out there, but someone will hate it. That’s life. What I learned very early in my career is don’t engage. Seriously. Don’t. Why? You might think, if I’m nice and talk it out with them, they might change their mind. That’s probably not going to happen because they aren’t reviewing YOU. They’re reviewing YOUR BOOK. Second, brow beating them because they said your book wasn’t fabulous only makes you look bad. Reviews are there for criticism—constructive or otherwise. If you don’t want to look at negative reviews or they aren’t constructive (Like saying your work is crap and you should never write again), then don’t. I didn’t know that was a thing. I thought authors should clamor for any and all reviews. You can, but you don’t have to.

Another career thing I came to understand and wish I’d known to start with is this is a crazy business and connections are vital. But it’s also a SLOW business. It’s not quite as slow now that self-publishing is in vogue, but if you’re with a publisher, don’t expect the book to come out tomorrow. It won’t. It takes time for edits, cover art, final edits… It’s not all fast. Oh, and promotion is mostly on you. I wish I’d have known that. I might have done financing a little differently. But again, that’s on my end. I should’ve known. Right?

Those are some things I wish I knew when I set out in this business. I don’t regret making the leap to becoming a published author. I love what I do. But it might have been nice to know where the potholes were before I hit them and wrecked a few tires. 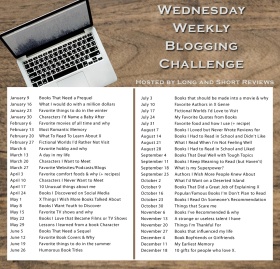 This week’s challenge topic involves a day in my life. I don’t know if it’s that exciting but I’ll give it a stab. While you’re here, check out the other posts. You can find them here: http://www.longandshortreviews.com/miscellaneous-musings/wednesday-weekly-blogging-challenge-for-march-13-2019/

A day in my life tends to look like this:

Get up way earlier than I’d like because I’m the taxi to take the tot to school. Tot gets up on his own and takes care of himself in the morning, but since tot can’t drive…

While waiting for tot to  get ready for school, I do part of the EDJ, which isn’t as evil as it might seem. I rather like the EDJ, but I’d also rather be sleeping instead. I also try to make sure the emails have been read/addressed and I’ve done a cursory check of social media. It’s not nearly as glamorous as it looks.

Once tot has been delivered to school, the dogs get fed and usually attempt to trip me. They like to run crazy through the house. Once they’re settled, I get my 2-3 mile walk in for the day. I’ve tried to walk every day and am up to over 180 miles walked for the year (my goal is actually 1000). I’m behind on my goal, but I’ll get there.

After a shower and clothes change, I tend to try to write. But Dh is home and there are chores to do, so until lunch I’m either attending to chores or whatever DH has in mind.

After lunch is writing time. I wish I could say I get to do this every day, but I don’t. Sometimes it’s impeded by vet visits, dentist visits or time spent with the Friends of the Library. Right now I’m spending a lot of time working on our upcoming author event.

I retrieve the tot from school, then once we’re home that’s about the time DH leaves. My afternoons are there to feed the dogs, meal prep, ensuring tot gets homework done, listening to drum/guitar practice (I don’t actively listen…it’s more like it’s thundering through the ceiling, so I have no choice), feed cats or they being to conspire my downfall, laundry and once the tot settles for the night, more writing. I’m a night owl, so I like to write later. I’d also like to sleep later in the morning, but one wish at a time… I carry the dog upstairs because that’s what she thinks I should do and crash.

So that’s my day.

What about yours? I’ll bet yours is much more exciting. Grin.

I know you’re as shocked as me. I’ve started writing more Wendi stuff again. It goes in fits and spurts. Sometimes Megan’s characters hang out. Other times Wendi’s play. Right now, Wendi’s are playing. Grin. And since I’ve decided to have a wordpress blog in addition to my blogger blog, here’s the ten lines over here. Enjoy these ten lines from the WIP!

Kaia sighed. “Would be nice to date a guy who wasn’t a controlling asshole or freaked out by what I did for a living. Talk to you when my set is done.” She strode up the steps and into the small circle. Seven windows surrounded her. She turned the chair around, then hooked one leg over the curved back. Head down, she waited for the spotlight to center on her and the music to blast.

“Time to be sexy.” Kaia flipped her hair over her shoulder and kicked her leg out high to the music, giving the clients a generous view of her thong panties. By one thirty in the morning, most of the clients just wanted to see boobs and bare ass. They didn’t give a shit if the music repeated or the light got stuck. If she showed skin, they paid up.