Look for the other Saturday Seven posts here!

For the last weekend in February, I thought I’d do an honorable mentions list for my Saturday Seven list. There are those actors from the Golden Age of Hollywood that shimmered, but they didn’t make the other lists. I probably thought of them AFTER I made the earlier lists. Hey, it happens. So here is my list of Honorable Mentions. Check them out.

As I’ve said before, I’m sure I missed a few. I’ll do lists of more current actors and actresses, but these are my Old Hollywood favorites. Did I miss some? Let me know. And don’t forget to check out the other Saturday Seven posts! 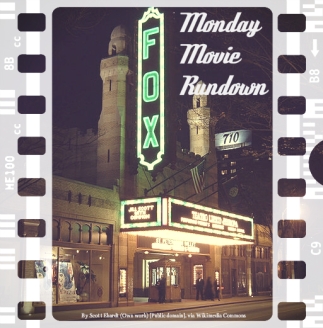 I like my share of older movies and the one I’m talking about today isn’t new. But it’s not old. It’s new-ish. At least it is compared to some of the movies I tend to watch.

This week I watched The Conspirator. First, I’m a history buff, so the movies that have a true story running through them (notice I didn’t say are the true story because this is Hollywood and they never get it 100% right) are interesting to me. I know this isn’t completely factual, but I like how movies like this inspire me to go to the library to learn more–which I did.

Second, I could listen to James McAvoy read the phone book and I’d be perfectly happy. Yes, he’s one of my favorite actors. That said, I didn’t realize he was in this film until I got the copy from the library. As Frederick Aiken, he’s quite good. I appreciated him having a Northern accent–hey, he could still read the phone book and I’d be happy, no matter what accent.

I also liked Robin Wright. Most people see her and think of Jenny from Forrest Gump, but I can say for me she became Mary Surratt. I wasn’t watching actors, but it felt like I was there.

Now this is a depressing movie. Truly. You know the president dies. That’s in all of the history books, but when the people behind the scenes are presented, it puts a different spin on what happened. It’s awful no matter what, but these people were people, too. I liked how the director, Robert Redford, ensured each character was human, rather than demonized.

If you want a movie that will make you think and possibly want to learn more about the Lincoln assassination, then The Conspirator might be the film for you.

I love old movies. Honestly, the older the better. I’ve got a love of old Hollywood, too. There’s something fantastic about the dream factory.

When I stumbled on an old Bette Davis movie, All This, and Heaven Too, I had to tune in.

I love Bette Davis. There’s a certain power and provocativeness in her performances and this book was no exception. She’s playing a young governess for French children and falls in love with their father. Now this would actually translate well into modern day storytelling because there have been plenty of stories where the husband runs off with the babysitter. The difference is the innocence. During the time of this story, the 19th century, I’m sure men ran off with the babysitter, but it wasn’t as blatant. It wasn’t discussed. Davis plays this role with that innocence. As a person, she wasn’t the innocent, but she portrayed it well. I felt for her throughout the movie. I felt how hard she tried to hide her desire for the Count and how much she knew it was wrong, despite him pushing the envelope.

Charles Boyer plays the Duc de Praslin, a man in a tough place. His wife, although still with him, is estranged from him. The scandal of them separating is too much for her. But she’s a taskmaster and cold to her children. She’s even colder to him. It’s a wonder he’s put up with it for so long. When Davis comes into his life, she’s a breath of fresh air. She helps save the Duc’s son and helps the children feel wanted again.

But this isn’t a sweet and wonderful story. Not all the way through. What Davis has to endure isn’t pretty. The Duc, after finally getting fed up with the Duchess, does something horrible. When she’s not seen for a while, the scandal gets out. Davis is eventually outted for her liaison with the Duc. Where she’s put in jail and on trial, he keeps the kids. It doesn’t have a pretty ending and let’s just say, he doesn’t pay as much as she does for the ‘crimes’.

It’s a great movie, but long, so be sure you’ve got time to watch it, but strap in for an interesting ride. It’s worth the time.